Yesterday (12:15am now.) was a really happy day.
– Cts ended
– celebrated with pizza at this quite atas place called peperoni pizzeria
– the pizza was awesome
– we took a lot of great photos
– went to watch the finals VJ vs mj – got myself Mr bean soya drink
– borrowing books sesh at woodlands library 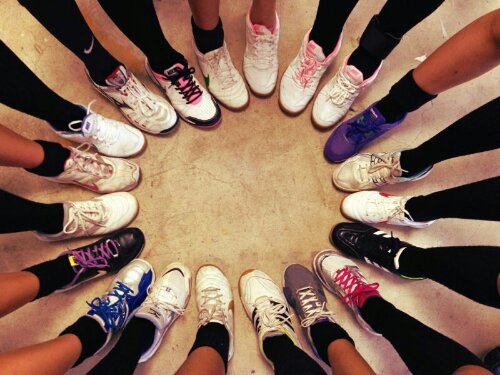 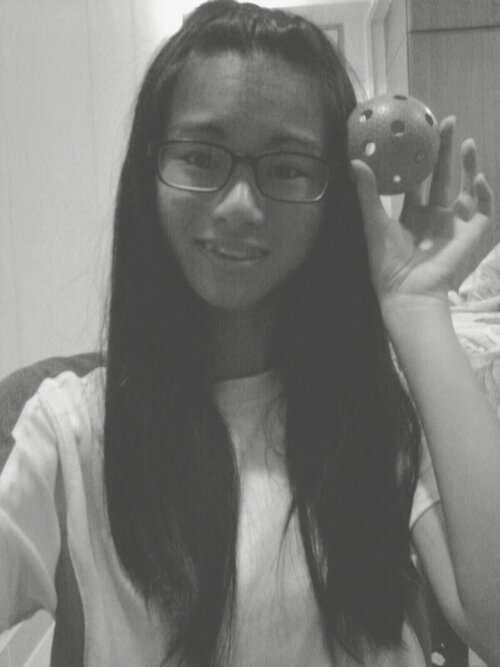 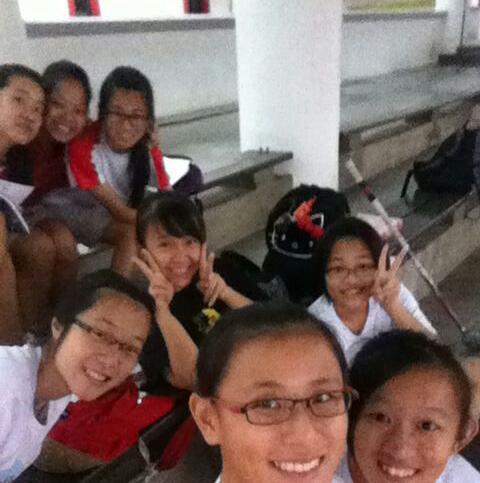 (I didn’t take the very last training we had. The dinner/night with pet, alvin, jiekai, jov, rongsheng, jacob, xinlei) 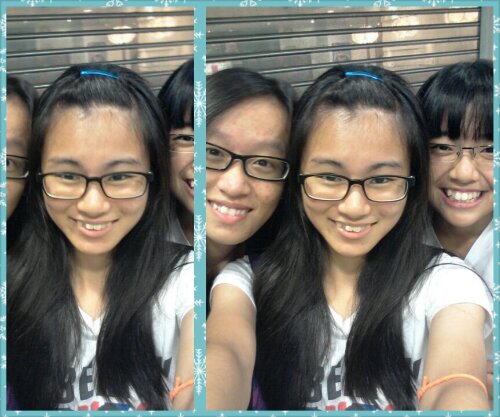 Horrid eyebags from mugging for cts.

Mugging at macs. From pet’s perspective. 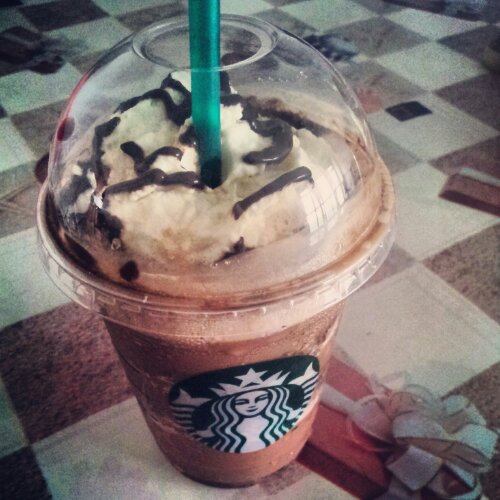 Mocha chip frappe to perk myself up to study today.

I always knew my $30 weekly allowance (slightly more than $120 a month) wasn’t much, but I didn’t really mind because most weeks what I have is enough. Sometimes I even get to treat myself to Mr Bean and occasionally splurge on things like new stationary and sushi. On less eventful weeks I end up saving almost $10.

Recently I discovered that other people were getting much more than I am, like $60 a week ($240 a month), $400 a month. I was a little bitter about that for a while, I guess. Sometimes I won’t attend outings because I know I don’t have enough to spend. But I came to terms with it because it meant I’ll eventually spend less than most others and get to have more money at the end of the month in future to enjoy.

Because mum’s fried rice got contaminated by the ladle which a lizard touched we ate outside food for dinner today. A meagre amount of stingray,

(Here’s the stingray! It was so yum. Expensive though like $10 for such a small slice I think my parents got cheated.)

bittergourd and rice to share among the three of us. My parents were overjoyed, I think mostly because I was buzzing over the stingray. “The chili is great to go down with rice,” Mum says. I end up trying to eat as little of the fish as I can so my parents can have more of it. And I realised Dad was doing the same. “Stop eating the bones, eat the meat,” Mum said, and I felt a slight wrench in my heart. I’ll do you proud. When I grow up I’ll make sure you don’t scrimp; you lead a comfortable enough life.

And I also felt happy. Because we were eating together as a family. I realised it’s a blessed thing to have because most other families don’t do that. I’m lucky to have ny family and sitting down together to have a meal. I’m content with that. I don’t need more than that.

What I have to do:
1) Study smart and do reasonably well for commons
2) Become motivated and focused again for the rest of nats

What awaits me:
1) My own sushi reward
2) Bubbletea
3) Pizza date with the gang
4) Redeem Starbucks birthday set
5) June holidays to catch up with work
6) Productive study dates

Today after our VJ match (which we lost 7-4) I was sitting there waiting for everyone so we can go and have dinner together. Then L and M went off to get their waffles first and S was like, I thought we were a team? Shouldn’t we all go together? And we misunderstood that P and A went off too (more than one time). As I talked to S I told her, the hockey team is so close and everything, and I compare them to us, and I feel like we’re a long way behind. She said, I think our main problem, why we can’t win, is communication.

Sometimes I feel like the IP thing just creates this unintentional barrier between the mainstream kids and the IP kids. I look at M and P talking, saying hey, you move there so I pass to you, then we change, …or like you stand there then you can pass to me so I can shoot. It’s just so effortless and smooth, two friends and team mates that’re so comfortable with each other’s presence (truth too). I feel like I’m the odd one out. The one that’s just there because, oh, well it’s 5 v 5 so I need to be there too. It doesn’t make much logical sense but that is what I feel like sometimes but I can’t do anything but try my best to rapport and communicate with them.

And it’s as though after all that we’ve tried, it still doesn’t work. I was actually walking down the steps to get going because I was so done with the day when I saw A, P and D watching the match so I went to join them and sat next to A. And I heard P say (yet again, though I thought it wouldn’t happen again) to D, I want to play with you, you should be in my line. I see your look of angst and despair and desperation, and I feel like breaking into a million pieces. When I walked away I heard her saying (I think, and again) somewhere along the line of us having shitty forwards. Which includes me, I guess, I’m playing forward. I’m sorry I’m not good enough. But I’m not sorry, because you hurt my feelings and you did it unbashingly. I don’t know what to do. I’m trying really hard to improve, but I feel like I’m always in the shadow of K. It doesn’t help that I look like K and am a forward like K. I always feel like I’m being compared (whether intentionally or not) to her. But I am not as good as her. P sometimes says, I wanna try this, I tried this with K when I played with her for nats, and sometimes I can’t do it. I feel like a burden. I feel like I should be better, but I am not. I am not as good as K, and it is the truth; there is no point disguising the truth and saying oh, you can be like her! You can do it! Because I can’t reach that standard. I just can’t reach it, no matter how hard I try. She makes it look so easy.

…and I just discovered why I cried after the RJ match, when coach gave me the cream wafers for being the “woman of the match”. (We still lost. We lost 4-3.)

All of this, after  I had finally discovered my love for the sport and for the team. I finally started enjoying trainings; going for lunch with them; joking around and just acting stupid- it was finally starting to become something like fun. And everything just got destroyed again. It’s worse when you start becoming attached. You expect great things. And when these things don’t materialize, all you feel is crushed. You feel stupid for expecting everything to be like this, to be better, even.

I read the back of the queue card I received while waiting for my waffles to come. Something  about love. About being single. It was so dumb; making singles seem so needy. (But isn’t that what I’ve been feeling these days? Needy.) How apt, B exclaims, looking at her own card, laughing at the quote on it. How apt, I look at mine and think.

I look back at the table; L, M, P, and A at one table. I should be there, but I am not. I feel like the distance between us increased so much, back to when it was like before we became  closer. I feel like I’m not good enough to be with them any longer. I feel as though I am blamed somehow. That they look at me, hey this person is still as shitty a player as she was before, someone not worth talking to. Society works this way, no matter how we deny it. Social hierarchies always exist.

Bringing me on to the next point. So SC got a new love interest in her life (the second one, considering that the previous one was just experimenting with her). I am happy for her, but to be honest, I am also insanely jealous. I am jealous because she isn’t pretty. She is just wrapped up in a good-looking package of materialism. I believe I am prettier than she is. I always thought I had a fine enough personality. But perhaps I need to see that maybe, I am just not that good a person as I thought I was before. Maybe it’s no longer about looks but about personality. I am jealous because I want someone to like me too. But I don’t even have a proper guy friend. Hell, I think I chased every single potential guy friend away with my replies and remarks. Or silence. Unintentional. I don’t know why I am like this. Why am I like this?

I replied her rather half-heartedly when she went on excitedly about how he is the one for her and that everything is going so well and she feels so happy and all and all I feel is the emptiness in my heart growing deeper. I don’t think she has a right to be upset with me because I “don’t seem very happy” for her. She didn’t even wish me good luck for my match today and she wished someone else good luck for whatever they have today. I thought we were besties. I guess our distance has grown too much. We’re leading our own lives independently now; our own circle of friends, our own experiences. I feel like I value her more than she does, me. And it hurts. I can’t blame anyone for this. It’s almost inevitable. It’s actually started way back before this incident happened. I look at the whatsapp chat window, and I see so much green and so few of the white. I tried not being the one to initiate the conversation and it just stopped for 2 days and I couldn’t take it anymore so I texted again. And I had to pretend that the chat disappeared down onto the next page too because I’ve been talking to many people (but I have not. It was at the 4th bar on the second day.)

I think I feel better after typing everything out. I hope I feel even better after I finish reading this long post.