a general feeling of discomfort, illness, or unease whose exact cause is difficult to identify: a general air of malaise | [ in sing. ] : a society afflicted by a deep cultural malaise.

a state of physical or mental inactivity; lethargy: they veered between apathetic torpor and hysterical fanaticism.

(of a person) slender and elegant. she was svelte and sophisticated.

a synthetic, addictive, mood-altering drug, used illegally as a stimulant: the amphetamine put him on a high for an hour | [ count noun ] : he was jailed for three months for possessing amphetamines.

any of a class of sedative and sleep-inducing drugs derived from barbituric acid.

• Chemistry a salt or ester of barbituric acid.

• the meaning of a word, phrase, or text: such quibbling over semantics may seem petty stuff.

a conference between opposing sides in a dispute, especially a discussion of terms for an armistice. a parley is in progress and the invaders may withdraw.

hold a conference with the opposing side to discuss terms: they disagreed over whether to parley with the enemy.

lay siege to: he led a relief force to the aid of the beleaguered city.

• put in a very difficult situation: the board is supporting the beleaguered director.

1 showing or expressing gratitude, pleasure, or approval in an unrestrained or heartfelt manner: an effusive welcome.

It was dark, breezy, city lights shimmering gently in the distance, the gentle hum of the night seasoned into our bones. I’ve always liked the city night. There’s a slow, determined pulse to it that never really stops. It’s not quite like the suburban regions of the city – dreary, woody and pretty depressing at times. I’ll always be a city city girl.

We actually haven’t met at all since the very last time, 2 semesters ago, when we weren’t even in university yet. It’s amazing how so many things have happened and how we have experienced vastly different things, but somehow or rather, we are still us, essentially. I don’t know if this will be the last time we will meet without things changing, for that is always how relationships end – more awkwardness, widened differences eventually leading to pretentious small talk that simply kills off everything that’s left of the relationships we used to have with the other person. I hope it isn’t.

I hope that in the future they invent a small golden light that follows you everywhere and when something is about to end, it shines brightly so you know it’s about to end.

And if you’re never going to see someone again, it’ll shine brightly and both of you can be polite and say, “It was nice to have you in my life while I did, good luck with everything that happens after now.”

And maybe if you’re never going to eat at the same restaurant again, it’ll shine and you can order everything off the menu you’ve never tried. Maybe, if someone’s about to buy your car, the light will shine and you can take it for one last spin. Maybe, if you’re with a group of friends who’ll never be together again, all your lights will shine at the same time and you’ll know, and then you can hold each other and whisper, “This was so good. Oh my God, this was so good.

— Iain Thomas, I Wrote This For You

As I grow older I realize that sometimes people are only meant to be in one part of your life rather than an extensive length of it. Because as time goes by, people experience different things, adopt different mindsets, values and tastes, and eventually, people grow apart from each other. Maybe that is the reason why long-distance relationships rarely work out. And why most, if not all, eventually weave their way out of our lives. People can only do so much to stay close to one another. I mean, one can contend and say that as long as both parties never stop trying, it will work out. But we simply cannot control the series of events that happen to us that mold and shape us into different people. We may become people who are no longer able to mesh as well with those we were once close to. And other people change, too.
Anything that withstands the pressure and test of time should be held onto as tightly as possible whenever and if ever we can, until we simply cannot any longer. 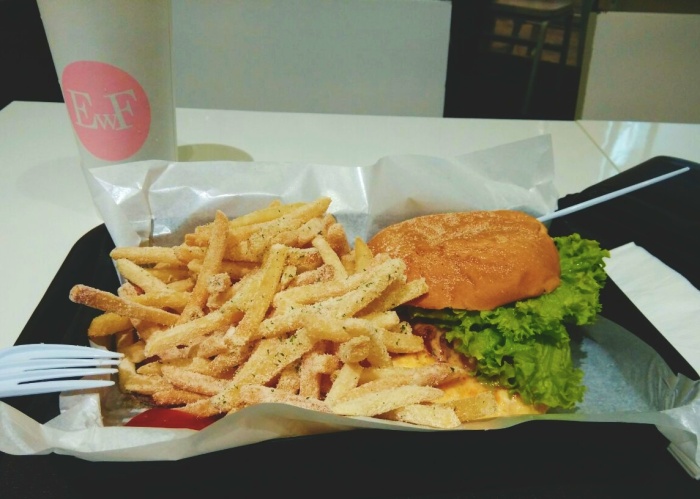 I ordered the Duck Leg Burger with Garlic Fries (which I didn’t get a decent photo of) while Jack ordered the Bacon Omelette Cheese Burger with Sour Cream and Onion Fries (photo above). The meal came up to slightly less than $12 per pax.

First off, the Duck Leg Burger was really salty. For a person who doesn’t enjoy overly salty foods, this was a pretty disappointing experience for me. Even Jack who has a (much) higher salt tolerance finds it too salty. The sauce had a really strong and heavy savory flavor which would have been delicious IF ONLY it wasn’t so damn salty. The garlic fries were good though. It was just the right amount of saltiness and just the right intensity of garlic (I would have been put off if the garlic taste was really strong but it was pretty alright/mild).

I also had a taste of Jack’s Bacon Omelette Cheese Burger and it was definitely much less salty than the Dug Leg Burger.

If I were to go again it wouldn’t be the same outlet because I don’t particularly enjoy the atmosphere and ambience of it — too fast food-ish? I mean I know that EwF is meant to be a fast food outlet so there’s that fast food outlet vibe (but the prices though). Maybe I’ll go to another outlet, say, Holland V next time.

But if I were to order again I would get the Bacon Omelette Cheese Burger with Garlic Fries. I might order truffle fries in replacement of garlic fries to try. Maybe I might even consider the EwF burger. Definitely I’d stay away from the Duck Leg burger. ‘3’

Okay so in summary:

Overall Rating: 3.4/5 (would not go to the same outlet again, but may eat again at Holland Village)

Sometimes I really wonder if I’m losing out, as though the things I’m experiencing right now ain’t exactly the best for my learning and honing my interpersonal and intrapersonal skills. I guess I can only find out after I graduate. Sometimes I wonder if I have ever been destined to be anyone great. (“What’s wrong with not being anyone great?”) I flip past the pages in which certain life situations and choices have pivoted me this way or the other, trying desperately to find out where I have gone wrong. Or maybe I should start accepting that maybe, being an ordinary person is just as fine too. Screw being at the top – I’ve not been so happy since the first time I stepped into the regimented education system. Would I rather be at the top and stressing everyday or would I be accepting of being somewhere in the middle and not stressing as much? (“But look at those successful people! They get to go on holidays, and I can only find out if being in the middle yields more stress than at the top. And I also want to have enough to lead a comfortable life. That’s the financial gimmick – keep you hungry and thirsty for the outside world while reining you into an 8 hour-5 day office job, so you would be more willing to spend more money on convenience and time-saving ideas as well as carefully marketed products and services, including travelling, spa, fine-dining and other indulgences. And sadly, I’ve fallen for it. I want it. I want it too.”)

I guess I’ll only be aware of the weight of my decisions as I proceed further on with life. 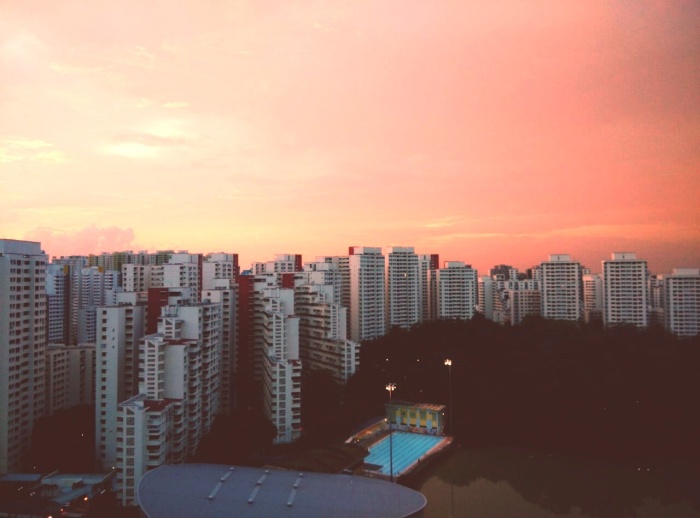 Today we went to Astons @ Jcube to have a simple Mother’s Day dinner. Together with the four set meals we ordered (2 steak, 1 chicken & 1 fish), we ordered 2 mushroom soups and 1 mocha drink. These added up to about $65.

Verdict: Value-for-money for a wholesome meal experience (a restaurant-vibe meal setting and decent food that will fill your tummy). There is definitely a compromise on both quality of food and service, but the overall meal experience that is similar to what you get at a regular restaurant with SVC charge and GST overrides that compromise.

One small qualm I had was the service. When we were about 90% done with our food, I noticed a service staff hovering over our table, eager to clear our plates. I guess it’s because there’s a long queue at the door, but it could have been less obvious, although the service staff tried to do it inconspicuously.

Able to observe a dip in food quality (check out the small burnt area on the garlic toast).

Dip in presentation of food. But what you pay for is what you get.

Astons with the family

As a whole, this place is great for families (because of the booths that sit 4). This may not be as good a place for couples in my opinion, due to the lack of private booths to converse at. 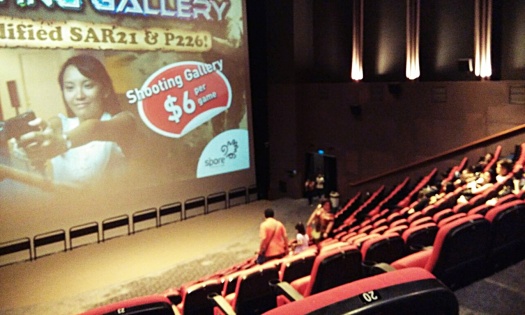 At Singapore Discovery Centre, waiting for Avengers to begin